Recollections of a visit to Uruguay. Part 2: Study visits


Apart from holding a seminar at the Feria Internacional del Libro, the week I spent in Montevideo in early October primarily consisted of a number of study visits to various kinds of libraries and bookstores. I got the opportunity to visit the Parliamentary Library, the National Library and a series of public libraries in different parts of Montevideo. As always when I do these kinds of intense rounds of visits to different libraries in a new town, impressions pile up. Here I will only briefly touch upon some of the singular ones that are still with me. 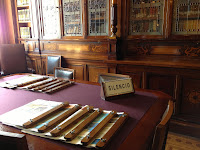 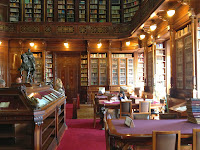 There are no guards. I am guided through the whole parliament with its fifty shades of marble and its library and there is a feeling of trust that is rare in political environments these days. The library is painstakingly beautiful. It is open to the public and there are signs saying ”silence”. 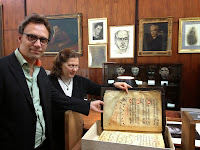 I am given a private tour of the National Library and shown through labyrinths and passages. Work is silence and intense. A table is set up in preparation for my visit, displaying rare photographs, letters, incunabliae and medieval manuscripts; folios and miniatures. I am shown a 13th century codex of hymns. Nobody knows how it got there. I am allowed to step into a freezer donated by the Bill Gates Library Foundation, used to preserve a unique and fragile collection of early 20th century photographs.

I visit several. In one, tango comes whispering through loudspeakers hidden on the shelves in the main room. Once a week the floor is cleared and the library hosts tango evenings. The head librarian loves tango. Only here, I find myself thinking, and perhaps somewhere in Finland.

I am taken to see La Biblioteca Maria Stagnero de Munar, a small castle in central Montevideo currently being transformed into a library and a cultural centre exclusively for children. It is an ambitious project and Prof. Gonzalo Halty at the División Promoción Cultural of the Intendencia de Montevideo, who is my host this afternoon, is proud. It is easy to understand why. This is the first centre/library of its kind i South America. I get a feeling that public libraries mean something to him. Suddenly he asks me, ”How should we continue?”. ”Don’t ask me”, I say. ”Ask the librarians. They’ll know what to do”. 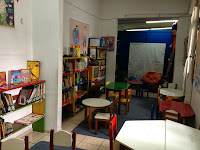 At the Biblioteca Dr. Francisco Schinca (in Montevideo public libraries are named), I see a different reality, that of high ambition and no money. In an area far from the wealthy city centre and grand projects, I meet librarian Lourdes Díaz, who runs this little library with determination and admirable strenght. This is not a library the Intendencia wanted me to see, so I thank Carina Patrón of the Uruguay Library Association for taking me there. The area is filled with social problems, but this library prevails with only limited support from the fund distributing authorities. Mrs Díaz and I speak for over two hours; about the value of libraries, about the value of resistence and about the joy of creating a space for reading and culture for the people far from the official agenda, be it political, social or cultural. 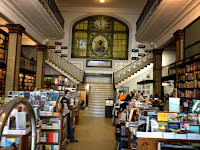 The very last thing I do in Montevideo is to visit the Puro Verso bookstore in the Ciudad Vieja.  I had eaten lunch there earlier in the week – yes, they offer lunch among the books. I just had to go back. In Sweden you don’t find them any more, bookstores that sell, well, books - and perhaps some music. Wandering through the shelves of Puro Verso I just cannot help wondering what went wrong in my own country. How did we end up with bookstores selling more branded stationery trash than books? Such a waste. It is comforting to know that stores like this exist in other countries, where books and reading obviously is taken more seriously than in Sweden.

That, and so many other things I saw and heard in Montevideo during my week in the warm South American spring filled me with gratitude and, dare I say it… hope.
Upplagd av Joacim Hansson kl. 13:24