Recollections of a visit to Uruguay. Part 1: book fair seminar

In april, I was contacted by Mr. Jim Larsson at the Swedish-Uruguayan Cultural Institute about coming to Montevideo to talk about public libraries. I had never heard of this institute, and had to check twice that it really existed before getting back to him saying that I would definitively consider coming - but what was expected of me? The initial plan was that I should give a speech at a book fair in Montevideo on the role of public libraries in the Nordic countries, as Nordic literature would be one of the themes of the fair. After a couple of months of discussions and practical arrangements, the pieces finally came together, and I found myself on a plane bound for South America. During the course of our discussions, the event grew and as I landed in sunny Montevideo, I had a full week of work ahead of me.

The main event was a seminar on October 10 at the 36th Feria International del Libro in Montevideo. The event gathered some 300 of the city’s librarians in a discussion on the future and the present state of Uruguayan libraries. 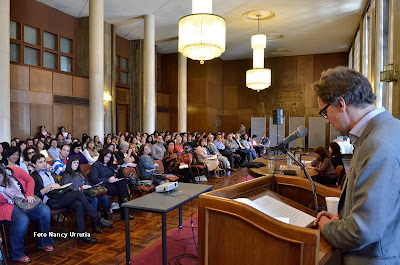 It was a highly inspirational event, and the discussion was very fruitful. It is interesting to note, that wherever you go, the fundamental problems and concerns about public libraries are pretty much the same. Material and political conditions may differ, but the need to find vital forms for cutural activities, platforms for critical political and cultural discussions is the same everywhere. A belief in the ability of public libraries in this respect was felt very clearly by the present librarians of Uruguay, a country which has a proud history of social welfare, but which suffered severly during the economic fall some ten years ago. The impression the visit gave me of the Uruguayan library sector is that it is both ambitious and determined to provide library services worthy of a welfare state to all citizens of the country.

There have been several political initiatives during the present government which carry the potential to be of significance for libraries. For instance, a decision to provide every child in a public school with his/her own laptop or iPad has meant that a large part of the population now, through the kids, have access to the international flow of knowledge and information on the Internet. This is a reform that at least at a first glance seems like a stroke of political genious in a country like Uruguay. Not only can it be helpful as school books are scarce and of poor quality, but it can open for new dimension in librarianship, as one of the most severe problems in the libraries I visited clearly was the lack of relevant media. Lack of media is, of course, a substantial problem in a library.

At the book fair seminar, many questions concerned the present state of Swedish and Nordic libraries, as they still are seen as models of ”the good library”. The view on Swedish society is still coloured by the social democratic welfare state of the 1960’s and 70’s, renowned throughout the world for its humanistic approach to politics. That we now have left that behind and entered a social era defined by other parametres than humanism and generosity seemed to come as a surprise to many. The reason for the almost glorifying view on Sweden is obvious – many intellectuals took refuge in Sweden in the 1970’s when political conditions in most of South America were unbearable. I had the pleasure of meeting several of them on this journey. Uruguay is the first country I have visited where the librarians and authors I met did not say ”we went to school together”, but in stead ”we went to jail together”. The stories they told were both dramatic and deeply moving. In such an environment politics and ideology is still visible and important, and the advocates of the current left wing presidency are concerned about the role of public libraries. They know that libraries can matter a lot, if treated well. The discussion went on for over an hour revealing structural problems, but also determination and willingness to solve them, not least through international dialogue. Some problems stood out; funding, for sure, but also the perhaps even more important question of how to think about libraries in local communities. I did not feel that I could give a lot of advice, but of course we do know some things from research. Instead it was my impression that the discussion in itself was of importance, and the fact that so many people were gathered at this same occasion provided a common ground for renewed discussons among librarians and politicians. Living under financially restrained conditions, as most Uruguayan public libraries do, it can be difficult to keep above the waterline of everyday decision making and practice. I hope that the seminar worked as an opportunity for those who attended to take a break from that and allow themselves to think ahead. It was obvious that not only questions, but also suggestions and solutions were there in that room on October 10. For me it was an important experience, and I wish that some Swedish librarians would have been there to listen, if only to hear the voices of dedication and determination of their Uruguayan colleagues.

The speech I gave is here (in Spanish).