Public libraries have during their entire existence been associated with democratic development. They have been key institutions in the opportunities for citizens to make informed choices and be active parts of the democratic process, based on a notion of the value of individual, non-instrumental learning – Bildung. Today this has changed. 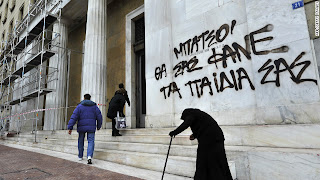 In Europe, the notion of democracy is more dimmed than ever, as easily seen in the economic development in countries like Greece and Spain. Decision makers in the EU deliberately go against the will and well-being of ordinary people (formerly the basis of democracy) only to fulfill the wants of financial markets – economic growth is to be secured, no matter the cost. This is of course a dangerous and destructive path to go; the democratic vitality of European countries have had to make way for economic administration, dressed up in democratic language.  A fiscal discourse is dominating the discussion and countries (and thus people) can be “helped” or punished at random.
In a society ruled by economism, "the market" defines the content of social and individual integration. Citizens are being reduced to consumers, and their democratic rights are replaced with their rights as consumers. This is a very different way of looking at people than the progressive democratic movements of the 20th century that created so much economic – and social – wealth were inspired by.
In this destructive environment libraries should have a chance to make a difference – but can they, or even more important, do they want to? We seldom see libraries explicitly talk about democracy, or democratic development, or individual learning, or Bildung anymore. What we instead see is a discourse that talks about access to not only “information” in a general, abstract sense, but to specific technical and commercial platforms and products as well. The bluntest example of this is the struggle among public libraries across Europe to get access to e-books.  The access to e-books is today the one single most important question for libraries, not least here in Sweden. In a European context where a whole new way of thinking democracy is badly needed, this is, to say the least, embarrassing.
EBLIDA, the European Bureau of Library, Information and Documentation Associations has initiated a EU-spanning campaign in order to “solve” the e-book issue with the publishers. The campaign takes its departure in a “position paper” (or “manifest”, as these things used to be called i a less administrative age). It is a statement which is clear enough: the word democracy is not mentioned. Access to information, as libraries provide, is defined as essential for a “competitive market”. Is this what libraries in Europe today has been reduced to, providers of information to a competitive market, sustainers of the ideology of economic growth?
Democratic development does not just need access to this or that “information”, it does require critical discussion, consideration of alternatives, political conflict. Without this democracy is dead. Public libraries has been very good in making all this happen – but how can they now, when they focus on issues which are important to please, first and foremost, those taking so many people down in the name of economic stability and growth?
Public libraries used to be able to sort out the bad guys from the good ones. They used to be strong in integrity towards politicians. Today the battle is with commercial actors - politics are not on the agenda at all. Really, you don’t have to be nostalgic to grieve this devaluation of libraries, neither in terms of their political relevance nor their social integrity.
The future is dark. A true change would require a completely different economic and democratic system, based on the good of man instead of economic growth – but, who dares speak seriously of this today? Certainly not librarians or their organizations.

Picture taken from CNN web site (may 25, 2012); Elderly woman praying outside the Bank of Greece in Athens, february 2012. We might assume she is not praying for more e-books.
Upplagd av Joacim Hansson kl. 15:01 1 kommentar:

When documentation was a threat to libraries – a 20th century tale


Studying the history of the European documentation movement in the early 20th century, one is mostly confronted with just a few names - Otlet, LaFontaine, Briet – whose contributions are mostly seen as individual achievements rather than parts of a general movements of their times. When Otlet and La Fontaine constructed the Universal Decimal Classification and the International Institute of Bibliography in Brussels around the turn of the century, they also defined aspects of a discussion which would engage many and increase in importance in the 1920’s and 30’s.
After these pioneers we find a second generation documentalists, whose work in many cases is more anonymous, but never the less built directly upon the limits and opportunities created by those before them. Among those who took the documentation movement into a more confrontational relation to librarianship was Frits Donker Duyvis of Netherlands Institute for Documentation and Filing (NIDER), and Federation International de Documentation (FID).  His dedicated work covered several areas in documentation and standardization, not seldom related to industrial development. He was also the one who initiated the development of the UDC into what came to be the perhaps finest bibliographical classification system to date.
When the documentation movement became more institutionalized, both with FID, and through the rapid increase of technical and industrial libraries and documentation centers, the library sector felt the need to in some way discuss and position itself to this “sign of the times”. Donker Duyvis was at the centre of events and, like many of his peers, he was deeply engaged in international work within his field. The first time that the International Federation of Library Associations (IFLA) seriously discussed the issue of documentation was at the annual meeting in Warsaw, June 1936.  The discussion came as a response to an invitation from the International Institute for Documentation, which in its conference in Copenhagen the year before had approached IFLA with the notion that primarily bibliographical issues needed to be dealt with in a new manner.
The reply from IFLA was skeptical. Marcel Godet, head of the Swiss National Library and chair of the Warsaw conference saw documentation in the light of the rapidly changing documentary environment, especially in technical economical and social fields, away from books towards more contingent document forms such as periodicals, bulletins reports and various loose sheets. The bibliographical adaptation needed had de facto already taken place in silence within many academic libraries, but on the international scene there was a need to keep distance between the technology-driven documentalists, and the tradition-laden libraries. Documentation was discussed merely as a sign of the times. Godet however was well known as a broad-minded man, and meant that this did not necessarily have to be a bad thing.
However, the division between librarianship and the documentation movement was to be maintained. In his work and writings Donker Duyvis and other documentalists more or less let librarianship go to focus more on how to handle technical and commercial information, creating standards for both types of documents and their bibliographical representation. Simultaneously in, primarily, national libraries, the need for new technology for bibliographic treatment increased. In Sweden the discussion reached a peak in the mid 1970’s with the first implementation of what would become today’s national union catalogue, LIBRIS.  By this time technology had reached such a level that the issue of documentation versus librarianship was not just a technical or practical issue, but one of identity. Documentation could no longer be discarded as just a sign of the times, but an approach to a cluster of professional identities that were slowly, but steadily merging – librarians and documentalists.
Today we can see this conflict as a tale from the 20th century. The turn of the century symbolically buried the hatches as the rapidly maturing Internet simply erased the differences. To understand the mechanism in the developed relation between librarians and documentalists is still important, however, to be able to make sense of today’s world of dynamic documentation and librarianship.

F. Donker Duyvis: his life and work (1964) The Hague:  Netherlands Institute for Documentation and Filing

A thorough account of the Swedish discussion is found in: