Librarians versus (real) users - comment on a new report.

I have on several occasions lately claimed that users have an unproportional influence on the thinking of librarians and the way in which libraries are discussed. We 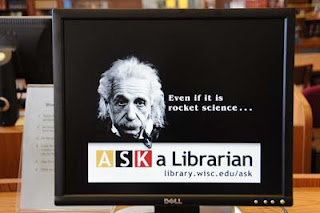 ll, not perhaps the users themselves, but the perceptions of the “user” that flourishes among librarians and LIS researchers. Almost every new thing, from the introduction of social media in libraries to new management formulas are legitimized by the perceived will of the “user”. At the same time we have known for quite some time that there is no group surrounding the library that is more conservative than…the actual user. This picture has once again been corroborated by a new Swedish report published by the Swedish Library Association. 800 citizens and 300 librarians have answered questions about what they consider to be the most and least important aspects of libraries. The study exclusively focuses on public libraries.
Many of the issues that so concern contemporary librarianship and LIS research are just not that important to the users. Two examples are the web presence and the idea of public libraries as “meeting places”. When it comes to web presence, it is clear that this is mainly a concern for librarians. This goes well in line with other international studies that indicate that web presence and use of social media is of marginal interest to users, but a high priority for librarians. Taking into consideration the efforts and resources put into this by libraries, this is an interesting result. There seems to be little doubt that the fixation on technology found among large groups of librarians – and indeed – LIS researchers have little bearing on the world and library activity of those actually using the library.
Another clear result of the study is the fact that most users are not particularly interested in their local library as a “meeting place”. Librarians however believe that they are. Within the LIS research community the concept of the library as a social meeting place has been in centre for several years now. It has been problematic though in that it has proven very difficult to define what this idea actually means. The library users know better – they go to the library to do their thing and really do not care much about the other users being there at the same time.
Of course the report – which is in Swedish – shows a wide range of results, and mostly users and librarians are pretty much in line with each other. The two examples I have lifted here are where they differ the most, and one may argue that this is no strange thing, but in some ways it is. Both web presence and the idea of meeting places are today so central to both practical librarianship and LIS research that we really have to ask ourselves what is wrong here. To me it seems like we in both practice and research take our point of departure in a perception of the user as we want her/him to be. Both areas are politically correct, but if the users do not respond to the efforts laid down in promoting them, then what we have is nothing but words, and that is – honestly – not much. Still, as everyone has to legitimize themselves, the discussion now might just turn to the question of the “good” user and the “bad” or “ignorant”one, or – even worse – how users could be “won over” to the side of the social and the technological. Evidently, what the citizens using libraries want is what they always have wanted; to borrow books, read magazines and newspapers – in a calm and quiet environment. The one thing they appreciate the most is a good and knowledgeable reception by the librarians. Well, some do indeed wish for a more socially stimulating and exciting environment as well – those between 74 and 85 years of age.
This is a good and interesting report. Hopefully it will trigger discussions and self scrutiny both among librarians and LIS researchers because we all know, in the end, the users are always right. Aren’t they?