This week, rainbow flags colour the city centre of Växjö. Växjö Pride presents an array of lectures, films, debates, concerts and lastly, a parade through town. I was happy to be invited to give a talk as part of the Linnaeus University Pride programme. I chose to speak about ”sexual diversity and the heteronormative library”. A point of departure was taken in the social norm reproduction of public libraries, and how this affects groups and individuals who are not heterosexual. The following is a summary of the lecture. 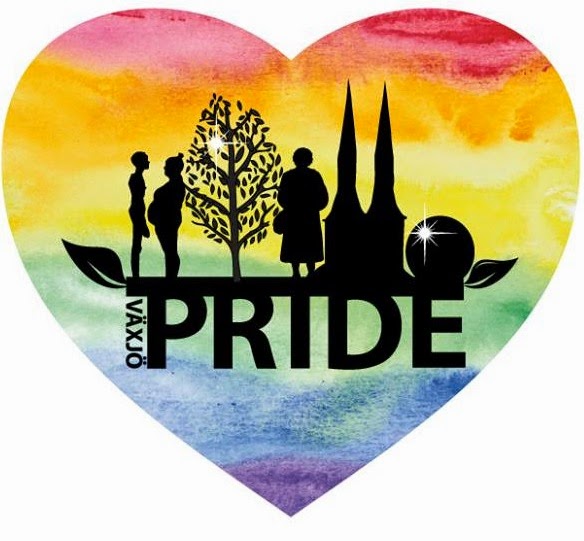 Public libraries are political institutions, but not just that; they are also moral and normative institutions, set to support the social order of which they are part. It is only during the last couple of decades that the traditional moral and normative aspects of libraries and librarianship has been questionned by a more user orientated approach, pushing back traditional preferences seen in acquisition and reference service in libraries throughout the westen world. At the same time, the idea of public libraries ”serving all” in society has changed. That an institution as the public library reproduces certain values is in itself nothing strange – this is somenthing all public institutions do. What is interesting to see is how those people, ideas, values and movements that do not fit into the reproduced norms and values are treated.
Traditionally, public libraries have defined themselves as extraordinary inclusive, stating ”all citizens” as their users. Norms and values of the majority has thus been taken for granted and alternative views and habits have been, basically, made invisible. That which is the norm is everything, and deviations do simply not exist (officially). If an alternative wants or needs to become visible in this enironment, it has to present itself as just that - an alternative.
Today the situation is slightly different. Libraries refer to ”all citizens” as their users to a much lesser degree than just a few decades ago. Instead, citizens are divided into defined usergroups, that may or may not be subject of certain attention and/or activites. Teenagers, book lovers, small children, parents, immigrants, various minority groups, elderly, homeless people and non-heterosexuals are just some of the groups frequently discussed within contemporary librarianship. Not all of these groups necessarily break with majority norms or values – but non-heterosexuals do. We may call this trend of prioritizing specific groups ”inclusion through distinction” or ”inclusion through separation”.  Instead of making a normative deviation or alternative invisible, it is instead the norm itself that hides behind these distinctions. The heterosexual majority is not considered a ”group”, but instead an invisible norm. Both of these approaches have their pitfalls, and the question is of course which is most beneficial to the minorities and alternatives.
When Library and Information Science scholars study sexual diversity and LGBTQ issues it is mostly within three different areas: knowledge organization (documents and their classification/indexing); the reference situation (focusing on librarian/user interaction and acquisition) and; information needs of non-heterosexual groups and individuals (user studies). In all, however, not much research is done, even on an international level, and and it is not until the late 1990’s that LGBTQ issues become visible in LIS research at all (but for some singular earlier exceptions).
Although public libraries have proven to be very important for non-heterosexual individuals for their coming out process, for their own identity shaping and as places where information and gay/lesbian (non-heterosexual) fiction can be found and ordered without pressure, there are a number of things that are still being pointed out by research as problematic. Classification and indexing systems are generally exclusively heterosexual bias in tebles and term choices, even if progress now is being made; when encountering librarians, the best service is provided to those who are most like the librarians themselves (in looks as well as in morals); information behaviour varies significantly within the LGBT community - one thing we do know however, is that transgender people have significantly more difficulties to find their use of libraries comfortable in the way that cis-people* have. Instead they turn to the Internet in a more exclusive manner than other LGBTQ groups.
How then are libraries approaching issues concerning non-heterosexual individuals and the LGBTQ community? As research and social development have made librarians increasingly aware of the specific needs of gays, lesbians and transgender people, we have slowly begun to see more and more attempts to attract these groups into ordinary library activities. In some cases, the creation of a ”rainbow shelf” is considered enough. This is of course not unproblematic in that such a shelf (or corner, or place) on the one hand creates visibility for these groups, but on the other separates them on a quite visible and physical level within the library room. Is that really what the LGBTQ community needs? What most people want, regardless of sexual, politcal or moral orientation, is to be included in their local community without predjudice and without distinction – to be like ”everybody else”.
Lately, a couple of libraries in the Stockholm area has taken the question one step further and applied for a LGBT certificate. Such certificate is provided by RFSL -The Swedish Federation forLesbian, Gay, Bisexual and Transgender Rights, and includes education and critical analysis of the activities of the organization in the light of LGBT needs and values. Even though there is always a risk that such certification can be used to gain cheap political points, it is, if taken seriously, an alternative that goes way beyond just putting up a ”rainbow shelf”. It remains to be seen how this work will turn out in Swedish libraries.  Perhaps it is indeed a way to include non-heterosexual individuals in the general norm of society on the same terms as anybody else – if so, that would be a significant step towards a new norm reproduction, not only for libraries, but for society as a whole.

*cis-pepole = those who identify with their birthgiven sex – the term is used to distinguish transpeople from those who are not.