On the complex issue of e-books in libraries

Slowly it is beginning to become clear: during the last months, the sales figures for e-books in the USA have been bigger than for those of printed books. People got a lot of various, electric, reading devices for Christmas, and now they try them out. The time has obviously come to consider these hard sales figures and discuss their consequences for libraries and librarianship. 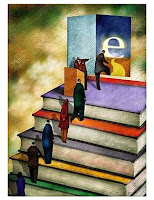 rary standards. This is hardly surprising, and should not be seen as a sign of slowness in the library sector, more of the aggressiveness and speed in the publishing/entertainment industry today – not only in the US. Most e-books that are sold today are versions of already existing printed books – as is the case of the bestselling Millennium trilogy by Swedish author Stieg Larsson, that according to the latest figures today sell more as e-books than as prints. Here e-versions come as “extra”, as any new version of the printed original. As long as this is the situation, librarianship will have no bigger problems in handling the e-books (except for issues like economy and copyright...). They will be in the margin of their ordinary lending activity. For a long time still, we will also have a relatively limited access to electric reading devices, and for a very long time to come these devices will be distributed among economically strong groups of society and large groups will simply fall outside of the market strata.
The really new situation will emerge (soon enough probably) when publishers find it worth while to no longer issue printed editions, or when the printed editions will be seen as second rate versions of the electronic versions of a text. In scholarly publishing this is more or less the case already today, but that is, whichever way we look at it, quite a different story. The true challenge for librarianship will be when this happens to novels, fiction, poetry, children’s literature and other forms of literature identified with the book as artefact.
There are several factors influencing the situation that lies ahead of us:

- Emotional: the term “book” will be reduced to a metaphor. What is left in an e-book is a text. This might very well turn out to be a real problem for libraries, as we know that most library users do what they always have done in libraries; borrow books – not in a metaphorical sense, but in a real sense. We must be very careful to start describing this as a problem. Here we may otherwise soon face a situation where librarians’ expectations of user behaviour is more coloured by producers of electronic reading devices and publishers than of the users themselves – a situation similar to that of the libraries’ felt need to use “social media”, which we see today.

- Technological: no library will be able to provide electric reading devices in any significant numbers to users that do not have access to them. They are (for long) too expensive and too sensitive. This will probably be less of a challenge and more of an obstacle in the developing of e-book services. A large number of library users will not be able to read these texts due to lack of technology, which brings us to a third, and more serious, problem:

- Social: libraries have for years now been increasingly important in providing access to electronic documents and information through their publically available computers. This is tremendously important to those large groups in society that still cannot afford, or for some other reason don’t have, computers and Internet access in their homes. The present instrumental collaborations between producers of reading devices and the publishing/entertainment industry make no such considerations, of course. Here libraries will face their perhaps biggest challenge for the future. Who to serve – the people who need them the most, or the commercial actors in the publishing/entertainment industry? It is a matter of interest which is indeed very real.

Why does this become a potential problem? Well, simply because there is a huge difference between selling text to read in specially suited reading devices and promoting (good) reading and literacy. Not ever have the commercial interests of the publishing/entertainment industry and the democratic mission of – primarily, of course, public – libraries been more in conflict than when it is within this development. The problems are easily foreseeable, but the solutions are complicated. Especially alarming is the thought of children’s literature in this development. Libraries have a responsibility to guarantee access to a broad variety of children’s literature for reasons both obvious and well known. The development of e-books threatens – in the long run – the libraries’ independence in relation to an industry which is getting bigger and more cynical by the hour.

As always it will be those with already the least resources that will be “losers” in this development. Once again: libraries have a choice here. To develop their mission to the benefit of those who need them the most – or to those who see them only as yet another channel of distribution of.…texts.