This weekend marks the annual Göteborg Book Fair, Bok och Bibliotek 2014. As part of the Linnaeus University programme, I gave a talk on library education in a historical and social perspective. The book fair itself was as crowded and horrendous as ever, but I was happy to see my own little session turning out to be very nice and surprisingly intimate, with a small number of politely engaged attendants. The talk was also promoting my upcoming Swedish book Att bilda en bibliotekarie, which will be out within a week or so on BTJ Förlag. The following is a short summary of the talk: 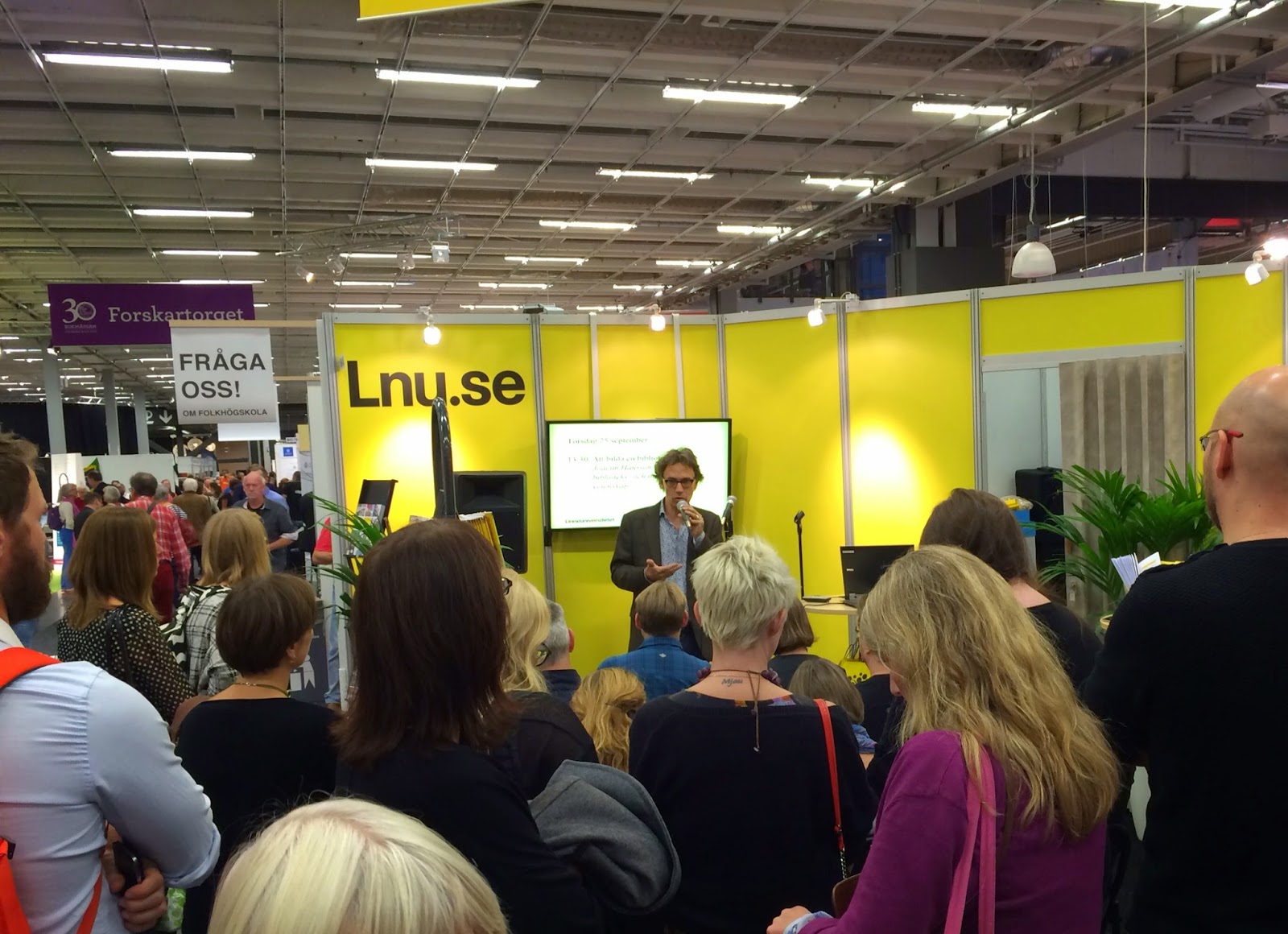 Librarianship builds on a long tradition of very stable practices. It has looked fundamentally the same for at least five thousand years. Very little has changed. This simple fact is something that many librarians and library managers and funders today seem to feel a bit uncomfortable with, since the norm in contemporary librarianship, as well as in society at large, is to be as adaptive and innovative as possible. Of course we see this in relation to new information and communication technologies. A technological imperative has replaced a moral one, which could thrive in times of less technological pressure on libraries. This change of imperative has also changed the ways we see library education. The idea of specific education for librarians is in itself not very old – it isn’t until the middle of the 19th century that we find what could be described as ”modern” library education curricula, first in central Europe, and somewhat later in the USA. In the very long time that preceded these, librarianship was thought of as a highly intellectual practice and there are many examples of erudite librarians working in close proximity to various cultural, religious and political power centres. For centuries the head librarian at the Biblioteca Apostolica in the Vatican State worked very closely with the Holy See, and in the 17th century France we find librarians within the inner circles of La Républic des Savants.
The closeness to power was not entirely broken unil the late 19th century when we see the emergence of educational programmes for public libraries, a completely new kind of library that on a local level needed another kind of librarians that those of earlier times. Melvil Dewey set the template for how these new curriculi shold be, focussing on a combination of literature and library administration and techniques.
When the first proper Swedish library education took off in 1926, it was fully inspired by Dewey’s American example (as were most of the ideas behind the public libraries). It attracted primarily well educated women, who completed various humanistic courses with a library education that in four month gave as many lectures as we today do in one and a half years in our LIS programmes.
In a sense these librarians might be considered as erudites, altough in another, more pragmatic sense than that of the 17th century librarians. For most parts of the 20th century librarians were seen as ”learned” professionals, something which gave them a specific status in their local communities or in their universities. It isn’t until we see the paradigmatic shift of information technology that this ideal for library professionals and the educational programmes that provided them starts to erode. Suddenly other qualities than humanistic learning and erudite morals takes over – the perceived needs of the ”user” replaces the authority of the highly qualified librarian. From an educational point of view, the final turning point is the implementation of the Bologna process which not only makes european Higher Education Institutions more homogenous, but also focus more on employability than morals and learning. Millennia of professional practice development was thrown overboard in the name of technology and economic growth ideology. It goes without saying that librarianship is a profession which is very badly suited to fit this ideology since the very core of professional integrity appeals to other ideals, now politically obsolete.  The new librarians graduating from our LIS programmes, however, are of course children of this age. Does this mean then that we should shut down our libraries or change our LIS curricula even more? Well, this is a actually hard to say, for as time rushes on, we are getting more and more aware of the fact that the economic growth ideology, which is the foundation of the Bologna process, is not very durable and that we need to find another path for social construction. In the same way that the old national states finally seems to crumble (it was bound to happen), the technological and economic imperative of higher education – and librarianship – will crumble as well and make way for something new. This ”new” might very well be a view on humanity as clever enough to build on experience and a trust in knowledge as a base for building sound institutions for the benefit of a more equal society, both economically and culturally. When that time comes, libraries will still be there and we who educate professional librarians will have a very strong tradition to fall back on. We will know what to do. The erudite librarian is also a humanistic librarian and when today’s society suffers its inevitable nervous breakdown, it might very well be that we will turn to classic humanities to get us back on track. The way to get there will, after this era of social media and pedagogical experimentation, be through traditional libraries and library services – provided by true, erudite professionals. That is, if they still exist. If it is not too late.
Upplagd av Joacim Hansson kl. 19:38