Recollections of a visit to Uruguay. Part 3: sea lions

After an intense week full of meetings, interviews, seminars, coctail parties, dinners, speeches and study visits, I had to get away from humans. I just needed to enjoy the company of other species too, and in Uruguay my interest had turned to a very special place.

On the last day before returning to Sweden, I left Montevideo and took off east along the coast to Punta del Este. There in the harbour, I went on a boat and sailed out on the South Atlantic ocean. Well, perhaps not sailed, the vessel itself was a commercial ”ferry” – a quite small motorboat. Anyway, after about 45 minutes I reached the goal of the day: Isla de Lobos. It is a small island about 8 km southeast of Punta del Este. On it lives one of the largest populations of sea lions in the world. Already some ten minutes before arriving at the island there was like a ”wall of smell” in the middle of the ocean. It intensified as the boat approached the cliffs of the small island. About 180 000 sea lions live there, and it is today a national park. Therefore it is not possible to go ashore, so instead the boat turned off its engines, and we floated close to the coastline. The air immediately filled with the sounds of the sea lions, mixed with their smell and the salty scent of the sea. It was some very sensual 30 minutes in the presence of these strange and beautiful creatures.

As curious and social as humans, no less talkative, but with a different language… and smell. It was such a relief (and fun) to spend time in their presence – in their own unique habitat. Going back, the captain told me to have a lookout for sperm whales. They had been seen close to the coastline earlier in the day. None was spotted though, but knowing that these giants lurked somewhere underneath made me curiously calm. 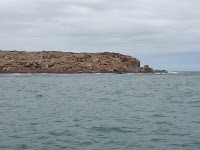 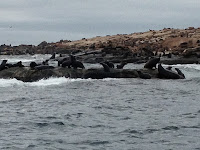