Condorcet and the origins of faceted classification 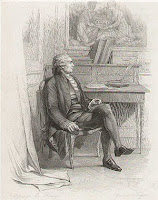 and Information Science it is common to see S.R. Ranganathan as the founding father of faceted classification. As a construct, faceted classification is superior to enumerative, strictly hierarchical, classification in its simplicity and flexibility. Defining who is first with what is however a difficult matter, as is disclosing genealogies of thought. It is of course reasonable to assume that Ranganathan didn’t get his idea of facetted classification out of thin air and one possible source of inspiration is to be found in late 18th century France. Mentioned only in a footnote in E.I. Samurin’s monumental Geschichte der bibliothekarisch-bibliografische Klassifikation, and just briefly discussed by a few other LIS scholars, Jean Antoine Nicolas de Caritat, Marquies de Condorcet (1743-1794) now and then emerges from the obscure corners of classification history. One reason why it is quite possible that Ranganathan knew of Condorcet’s work was that they shared the same academic “home” – they where both mathematicians. As such, Condorcet was prominent, by many regarded as the “father” of social mathematics, and erudite member of several learned societies around Europe (among them the Royal Swedish Academy of Sciences). His interest also turned into philosophy and he counts as a major persona in the creation of the philosophy of the enlightenment, something which is manifested by his involvement in the creation of D’Alembert’s Encyclopédie. The work which concerns us the most here, however, is his Esquisse d’un Tableau Historique des Progrès de L’Esprit Humain, published in 1794. In this he combines mathematics and his passionate engagement in revolutionary social progress. He was active in the French revolution, and a vivid advocate of the democratic development in the then new USA. His classification is basically an attempt to make possible to test any hypothesis, and discover the general relationships between any given facts from every possible point of view. It is a classification of “everything”.

The system Condorcet constructed has on a few occasions been compared to the one hundred years younger system of Melvil Dewey in that it is based on what seems to be a decimal division. However, the differences between the two systems are so profound that I believe such a comparison to be misplaced. Instead of the strict decimal hierarchies of Dewey, Condorcet created a system of categories in “layers” that in fact defies some of the fundamentals of later classification theory, such as exhaustivity and mutual exclusivity between classes.

The system itself consists of five major categories (facets) divided into ten “terms” each:

III – Points of view from which objects may be studied: (0) Knowledge of their nature and quality, (1) …of their relations and affinities, (2) Anomalies, exceptions and local variations, (3) Measurement and evaluation, (4) History, (5) things considered as causes, means and principles, (6) …as effects, products and applications, (7) General laws, calculated or exact, (8) General laws, neither calculated nor exact, (9) Hypotheses and opinions.

V – Ways in which knowledge may be acquired. (0) Knowledge that may be acquired by oneself or “meditation”, (1)…by observation and experience, (2) …by travelling, (3) ….from books, (4) …from manuscripts, (5) …from lessons by a teacher, (6) …by correspondence, (7) …in conversation, (8) …from conversation while travelling, (9) …by ideas received entirely from someone else.

In terms of content, the system can today only be regarded as a charming absurdity. The point of the system – and its contribution to classification history – is, however, in its method. It is not a hierarchical system. The construction of classes is made by constructing a sequence of digits representing a term in one of each category (facet) in the order I-V. If necessary, each category can be expanded with two-digit terms, thus making the decimal construction arbitrary. This method is similar to later versions of facetted classification systems, such as Ranganathan’s Colon Classification. Whether Condorcet was known to, or indeed used by, Ranganathan is – to my knowledge – not established. If this would show to be the case, it would further our understanding of Ranganathan in that it would put his method of classification in a very different context than that which is mostly referred to today. It would in fact contribute to our understanding of the very philosophy of classification that Ranganathan outlined, a philosophy which in both thought and rhetoric is so much like the thinkers of early European enlightenment, but – seemingly – from a completely different point of departure.

Condorcet’s classification scheme is presented and discussed in detail in these two publications:

Withrow’s text has been used as reference in getting the English terminology in the classification scheme correct.