A few days ago, I got a book in the mail that I had eagerly waited for. Not because I happen have a chapter in it, but because it is collecting, almost encyclopaedia-like, a large numbers of theoretical frameworks that have influenced and will influence in the future, the field of Library and Information Science. Critical Theory for Library and Information Science, published on Libraries Unlimited, is the first anthology to gather theoretical frameworks – and theorists - that are developed in order to support research in working as part of society in terms of political and emancipatory activity. Each chapter consists of a presentation of a theorist and his of her theories with brief suggestions on their relevance for LIS research.

In many parts of LIS socially informed critique is still something controversial new. Theoretical constructs and claims have often been formed around empirical bases like “human information behaviour” or “performance measurement of information retrieval systems” without taking political or ethical values into consideration. 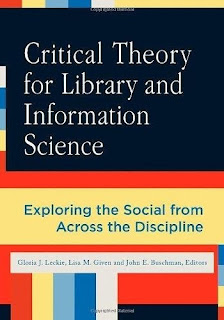 In the mid 90’s a discussion started about an often undefined social “context”. It was felt that contextual analysis would enhance the social relevance of theories stuck in a cognitive position which in many cases had reached a dead end for the understanding of the complex issues of information behaviour. The need for social legitimacy was pretty much the basis of the ISIC (Information Seeking in Context) conferences of the late 1990’s. Some of us remember well the pivotal key note speak by Dr. Brenda Dervin at the first ISIC conference in Tampere, Finland in 1996, where she described “context” as an “unruly beast”. Without doubt the contextual addition to traditional theoretical claims in information behaviour research made these more complicated, interesting and relevant. Still, the context must be filled with something if we want research within LIS to have a true social relevance.

With its roots in the Frankfurt School in the 1920’s, critical theory has today developed into sophisticated analytical frameworks suitable for research in most disciplines. What they do is basically that they mark a standpoint: as researchers we have a responsibility – our analyses serve a purpose.

The bottom line in all critical theory is Marxist theory, today developed into a large number of varieties (most of the contributors in the anthology do most likely not identify themselves as “marxists”). The editors of the book formulate the current points of departures very well: “The recognition of the complex heterogeneity of people is now a core idea, and the relationship between genuine multiculturalism and democracy was established. Furthermore, critical theorists have shown that the actions of professionals are implicated in power – asymmetrical relations based on class, race, ethnicity and sexual preference”. Accepting this as a basis for theoretical claims and construction - and empirical research - brings not only legitimacy, but it also places the researcher as an actor in the midst of society.

As a discipline LIS is very well suited to fill a space in contemporary social discussion. Focussing on issues crucial to late modern society dominated by communication technology and massive information consumption, we are able to go behind, study and reveal barriers of inequality and power structures surrounding us all – it is our job, and it is our responsibility. In contemporary critical theory tools are given and for LIS – with Critical theory for Library and Information Science – we have now a fine toolbox.